Such an incredible to look back at the history.. 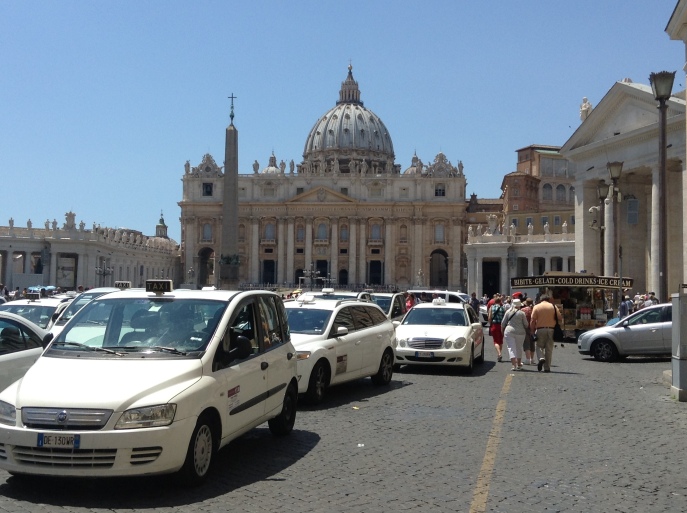 But exactly 70 years ago this week, it was teeming with American tanks, trucks and jeeps, forcing the occupying German troops north and liberating Rome.

June 4, 1944, was the day U.S. troops and Allies reached the Eternal City, freeing it from the insecurities of wartime — hunger, persecution and fear.

A bright floral wreath of yellow and white was quietly hung today under a commemorative plaque on the side of the building that houses the Vatican press office. 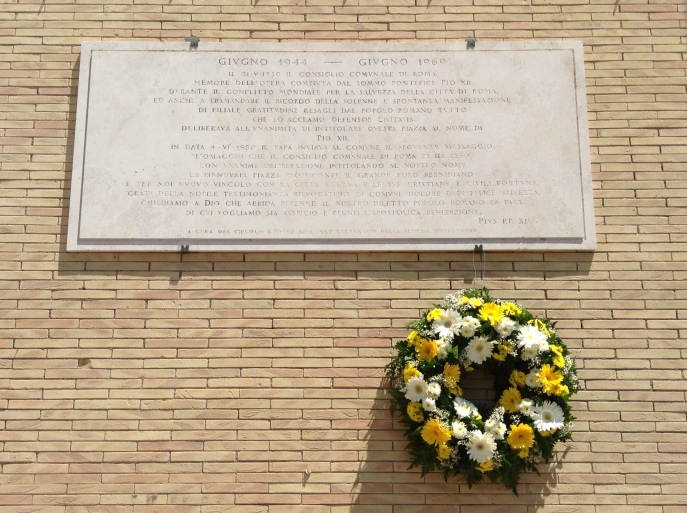 A stone plaque commemorating the role Pope Pius XII played in saving Rome from bloodshed and havoc as the Germans abandoned the city and retreated north on June 4, 1944. (CNS photo/Carol Glatz)

By nature human beings want to be appreciated, recognized and valued, which I think is a good bridge, if you like, to interrelate to each other. Some produce actions that would impress others and seek for the appreciation in return. That, I categorize it as a superficial level of doing good if one is intending to do good. Aside from that, there is a saintly level of doing good for others purely for the sake of goodness. A number of selfless figures have laid down good examples for us such as, Mother Teresa of Calcutta, Gandhi and Desmond Tutu. These people lived their lives selflessly for the betterment of others. That was how they define life. A human dignity was selflessly earned that way without the intention of earning it. This is the crucial issue that I am going to talk about in this article.

On the road to change in Burma, many of us have already taken a great deal of things for granted. Under the name of ‘change’ individuals are still pursuing for power. The power to take control, the power to earn recognition and praise. Aren’t we tried with a bunch of jerk offs who were desperate for power for more than five decades? Looking at the situation closely, I personally think, this is the right time to detach our inborn immaturity to seek for praise and recognition for the long struggle of peace in our country. It is time to nature the courage to do something of our own good selflessly.

‘Sacrifice’ is what does not really matter for most of us nowadays. The philosophy of individualism introduces us the rights, needs, and wants of each and everyone of us. On the other side, it teaches us how to get, not how to give. Living in that current of getting, giving becomes the hardest principle to practice. Unless there is something profiting for us, we are not ready to engage in anything. Relationships become very commercial and superficial. In this, I am seriously talking about how we relate and communicate to each other. In this structure, we look at our partner as a prey not as our neighbor. Being genuine is rarely a case in modern time. Fake smiles, fake smart phones, fake friends, fake love and fake things. Pause yourself and think about it, you will realize it is true. The world is becoming too greedy. Including us.

Late Pope, now a saint, John Paul II was famous with only one word during his struggle for the political change in Poland : “Solidarity”. Polish across the country were raising banners that said “solidarity”. This particular world composed of ten alphabets is a magnificent word for change if internalized it by all of us. It is the concern, the care and the understanding of what we are going through as a whole. How could one of us think of taking for granted of things in this situation? Let alone be the greediness and struggle for power, it is time to look at the whole country as a family. If we don’t fix this mess by ourselves, who else is going to fix it for us? It is time for ‘solidarity’ before it’s too late.

What good is it if your brother in Kachin state is not having a meal when you are enjoying a grand dinner in Yangon? What good is it? What good is it if your brother in Chin state is suffering from cold when you are sleeping in a cozy hotel in Yangon? Aren’t we all bear the same identity? Aren’t we all living in the same land? We write our history. We are the author of it. It is the sympathy, the big heart that has rooms to embrace the reality. The reality that we are broken into pieces by our immaturity and selfishness. It is time to accept, realize and move on for the betterment AS A WHOLE. “Sacrifice”, “Solidarity”, and “Selflessness” will do a great deal of good.

It was really helpful for the viewers hearing from these three different personals: Victor Gao, a so called representative of the China based friendship association between Myanmar government and Kachin, Phil Robertson, a human rights watch and Zoya Phan, a refugee and a political analyst living in UK.

Gao’s main interest is the welfare of China that the Kachin refugees should not cross into China and disturb it’s peace. For that reason, his association was probably established ( the legitimacy of it is still doubtful). He isn’t siding with any party avoiding whatever problem that may cause to them. However, as an individual who cares enough for the misfortune ones, he should get into this conversation with open mind and maturity. He denied the fact that China is somehow the cause of this chaos. Why has he never mentioned that China constantly pursues their plan to establish gold mines and power plants inside Kachin state and other parts of Myanmar? The sovereignty and peace of the Kachins were disturbed by the entry of a bunch of Chinese. Tensions were built between the government and the Kachins protecting their land and rivers. When the chaos comes China wants to wash theirs hands and send the refugees back to Kachin state.

It is as well true that the government has been blocking humanitarian aids across Kachin for they fear that the real situation might be covered by the media, neglecting the sufferings of the Kachin refugees. The cruelty of the government and their ignorance is exposed here. The reason they gave to the world  for blocking the humanitarian groups was pretty funny as well. They reasoned that the aids might go to KIA ( Kachin Independence Army). However, as Robertson, in the video, has explained, the humanitarian aids agents have the capability to differentiate between the combatants and the civilians. It is just a very naive and bold reason that the government gave.

Zoya Phan has made the situation and it’s root very clear. It is the will of the Kachins led by KIO and KIA to have the autonomous federal state. It is the only demand they imposed on the government and the demand actually is quite relevant with the democratic reform that Thein Sein is leading. If the demand is not foreign to such a now- democratic nation, why can’t they just give it to them? Not just to Kachin state, but to all the states across Myanmar.  Zoya added that it is the aim of the military to crash KIA down and level up the military power inside Myanmar. Knowing the situation in general now, we can conclude that Myanmar government has never given up their hope to maintain the control it’s military has on the country and people. A road to democracy as they put it is just an excuse and a hide out for their smoother road to military regime.

The video explained how the early leaders of Burma longed to be a neutral country, resisting the influence from both communism of Russia and democracy of the west. Burma leaders thought they must nature a form of government that best serves the country and it’s people. The type of government they preferred is “socialism”. Watch the video and analyze it for your information.